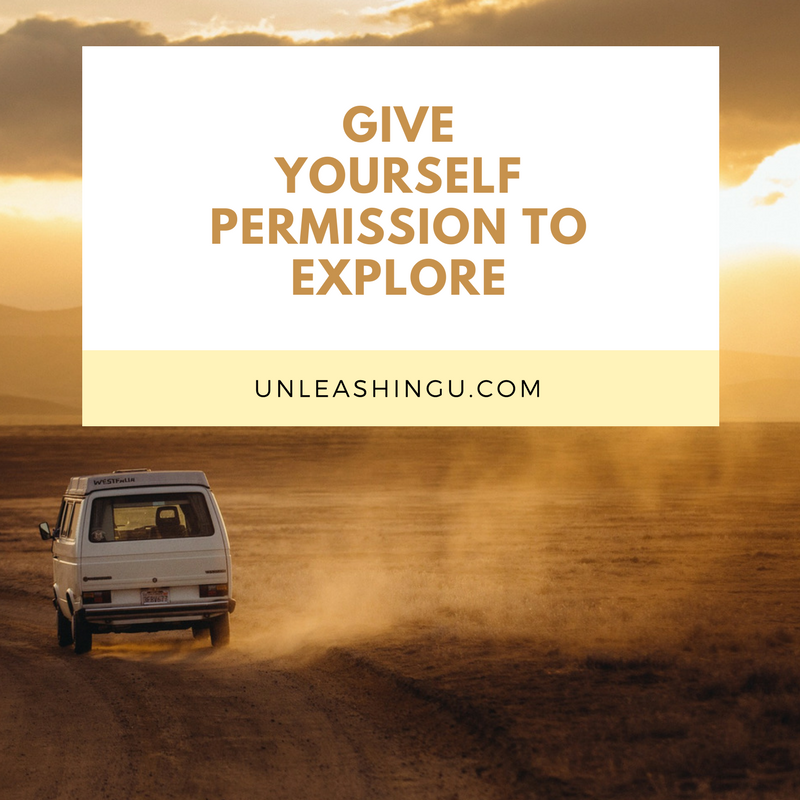 If you are at a crossroads right now and are having a hard time figuring out which direction to take your life, career, or even relationship in, now might be a great time for you to take the time to explore.

Does taking time to explore to find your direction feel frivolous to you?

You might view taking time to explore as something frivolous. It may feel like play to you, something you might have been encouraged to do as a child. Now that you are an adult you might feel that it is irresponsible of you to give yourself permission to explore.

However, this exploration might be exactly what you require right now to help you gather the information you require to get clear and directed in your life, your career or business direction, and/or your dating/relationship direction.

Give yourself permission to explore. It will help you get clear on your direction.

The most important aspect of taking time to explore is giving yourself permission to do so.

Recognize your need to explore right now as the necessary stepping stone to you gaining direction and making better decisions about your future, your life, your career, or your relationship(s) moving forward.

Perhaps you have never fully given yourself the permission to explore and that is exactly why you are feeling stuck right now. Exploring is a natural aspect of our personal and biological development. If and when we skip this stage of our growth and development, it can leave us feeling frustrated and incapable of moving forward.

I once worked with a client who was having a very difficult time making a decision about his future. He simply had no idea what he wanted to do post his mandatory army services. In our exploration together I helped him to realize that for most or all of his life he was taking action based on what was expected of him or based on what was considered the accepted steps to take along the journey of life and growing up. He went to pre-school, then the primary school everyone went to, then enrolled in the community high school everyone else went to, and went to a post-high school overseas program his own brothers went to. After that he enrolled in the army, just as most of his classmates and his brothers did. Although finally starting to explore what his passions were in the army, he never fully took the time to really get to know who he was and make choices that were an outgrowth of what he wanted to accomplish in his life. He did not have the answers to these questions.

In noticing that he never fully took the time to explore and get to know himself, I suggested he take the time now, at the crossroads where he was at – deciding which direction to go in (either going to university or getting a job), to explore and get to know himself well so that he could make choices for his future that were in alignment with who he is and what he wants. I then gave him direction on how to do this.

Taking time to explore can feel scary for some

Although it felt scary for my client to do this, he was excited about the prospect of finally discovering what he wanted. I acknowledged his fears (this was his first time exploring and making his own major life decisions!) and reassured him that his approach of exploring will give him the clarity and direction that he is looking for.

My client’s result with his own exploration

My client decided to go into the workforce as part of his exploration. That is what felt most right to him and he was very happy doing that. I stay in touch with my clients even after they have finished their coaching program with me. A year or two later, my client updated me that he was enrolled in university and picked his major based on what he realized in his exploration he was passionate about. A few years later my client updated me with the news that he was engaged and so happy. He thanked me for the support in helping him to reach that point and I was humbled and joyful to the point that his news brought be to tears.

This is one example of how giving yourself permission to explore is likely to lead you on the path and direction that is most right for you.

Is it time for you to explore?

If so, I can help you figure out what direction to take your exploration and guide and support you on your journey so that you can feel reassured and not alone in the process.

In support and admiration,

Hi, I'm Jenny Sassoon, founder of UnleashingU! I help you go from confusion, struggle and self doubt to clarity, confidence, fulfillment and success in your career, business and relationships by reconnecting you with your essence and guiding you to take ownership of your life. Click on the 'Contact' Tab to schedule your complimentary 45 minute consultation to meet or speak with me and learn more about how I can help you.

I have found that whenever we are experiencing something challenging, if there is a victim-story that...

I received amazing feedback from my client the other day when I checked in...

Have you ever wondered what sets you apart…as an individual, professional, partner and friend?...

I’ve been thinking a lot about how important it is for each and everyone...

Subscribe to receive Free tips delivered directly to your inbox!

This website uses cookies to improve your experience while you navigate through the website. Out of these, the cookies that are categorized as necessary are stored on your browser as they are essential for the working of basic functionalities of the website. We also use third-party cookies that help us analyze and understand how you use this website. These cookies will be stored in your browser only with your consent. You also have the option to opt-out of these cookies. But opting out of some of these cookies may affect your browsing experience.
Necessary Always Enabled

Any cookies that may not be particularly necessary for the website to function and is used specifically to collect user personal data via analytics, ads, other embedded contents are termed as non-necessary cookies. It is mandatory to procure user consent prior to running these cookies on your website.